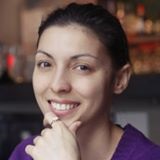 Graduate of the Department of Cultural Technology and Communication,  of the Aegean University. From November 2014 until September 2015 was worked on production, directing, filming, editing, research and scripting for the creation of a series of short documentaries on student life titled "In the Academic Quartet" on behalf of "Parliament TV". In December 2013 and September 2014 she participated in the creation of a series of daily broadcasts of the International Documentary Festival AegeanDocs for NERIT television. In October 2016 she attended the AUDIOVISUAL COMMUNICATION - WORKSHOP IN DOCUMENTARY 2016 "DOCROADS" where she created the documentary titled: "One Last Time".